The most beautiful photo book of the Dolomites 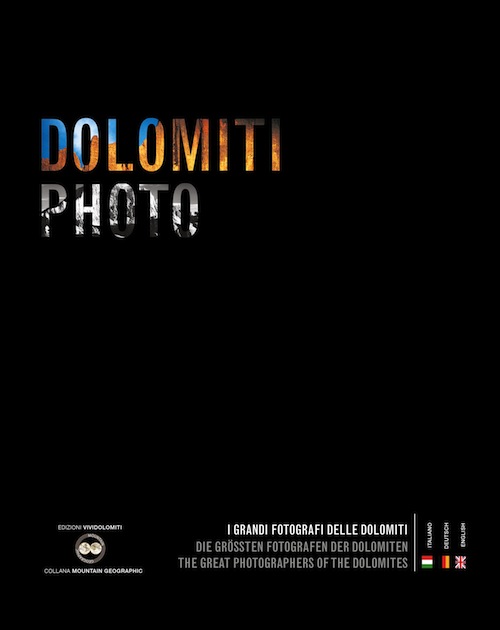 «What colour is this mountain? Can you actually find an adjective that defines its exact colour, which is so different from that of the other mountains? Every time that the undersigned goes up the mountain and sees it, I tremble with emotion, bringing back poignant memories. No, an appropriate adjective does not exist. More than a precise colour, it is an essence, perhaps an evanescent substance that from dawn to sunset takes the most curious reflections (grey, silver, pink, yellow, purple, blue, sepia); yet it is always the same, just like a human face does not change even if your skin is pale or burnt. [-] And what colour is the mountain according to those who see it from the valley bottom? White? Yellow? Grey? Pearl? Ash? Does it have silver highlights? Deadly pale? Carnation pink? Are they stones or clouds? Are they real or a dream?»

The term "Dolomites" is derived from the adventurous French scientist's name Dèodat de Dolomieu. In 1789, when the French Revolution broke out, the scientist was travelling in the mountains of Tyrol. He noticed some rocks that were very light in colour and at the beginning he thought that they were calcareous. However, later on he detected that they had unusual chemical reactions and published his discovery in the "Journal de Phisique". Therefore, some years later, that kind of mineral was called Dolomite (in Italian: Dolomia) in his honour. Half a century later, the Dolomites got their name in the travel book titled "The Dolomite Mountains" (1864), written by the English authors Josiah Gilbert and Cheetham Churchill. Over some decades, the term Dolomites replaced the old poetic and obvious name Monti Pallidi. It was a book that left a mark in the history of the last two centuries of those mountains, giving their new name. The double carbonate of calcium and magnesium (dolomite) gives the rock its unique colours and morphology. Therefore this mountain range, part of the Alps in the Northeast of Italy and equally shared between the provinces of Belluno, Bolzano, Trento, Udine and Pordenone, were declared a UNESCO World Heritage Site (on 26th June 2009). However, the Dolomites are not simply that: they are known for being a sought terrain for alpinists from all over the world and their inhabitants make them hospitable. Even their strong and rhythmic name contributes to make those mountains a myth. Finally, also their colour is amazing: perhaps this ineffable and fleeing element in itself is the intimate essence of the Dolomites. Only photography can interpret this language and tell us about those places, which cannot be expressed in words.

Now, that a judgement on an object by which its agreeableness is affirmed, expresses an interest in it, is evident from the fact that through sensation it provokes a desire for similar objects, consequently the delight presupposes, not the simple judgement about it, but the bearing its real existence has upon my state so far as affected by such an object. Hence we do not merely say of the agreeable that it pleases, but that it gratifies. I do not accord it a simple approval, but inclination is aroused by it, and where agreeableness is of the liveliest type a judgement on the character of the object is so entirely out of place that those who are always intent only on enjoyment (for that is the word used to denote intensity of gratification) would fain dispense with all judgement.

Welcome to Dolomiti Photo. The great photographers of the Dolomites: a collection of suggestive images taken by selected expert photographers from all over the world. You will find a description of each photographer's vision of the world before and after the picture was taken.
The sure thing is that the Dolomites are one of the most popular subjects of landscape photography, also for photographers that practice and improve their technique there. Why are those places considered so attractive in photography? Theoretically every mountain lover can take iconic pictures, which can give him memories of his excursions and convey his emotions to those who see them.
The photographer's efforts translate into the immediate concreteness of his/her job, which gives him/her satisfaction, that is bigger than the difficulties of the job (bad weather conditions, the long wait, hard walks and unplanned bivouacs, worthless excursions and those situations where you have not brought the camera with you).
Luck, initiative, tenacity and intuition merge as a single discipline that goes beyond a clerical post and people are carried away by its sense of freedom and control.
Here it is the distinctive feature of Dolomiti Photo: the photographers that captured the beauty of nature are those that then lose control. The composition of the photos in the book is inspired by a principle of affinity with nature: the power
of the Beauty that the Man (and his camera) gives back to Nature. Page by page, Nature is the only one that can narrate each photographer's style: she is the subject that narrates the perspective. She "lives" in the picture describing the style that immortalized her. Therefore the Dolomites, which are an enchanting place, become more than an object: they are a theatre where emotions and human cultures play in their subtle touches that create a photographic composition of a colour, a story or a perception that has to be conveyed.
Photographed by a sample of humanity, the Dolomites become its photographers.
The images of the collection have been selected and combined according to the noble aim of this research: bringing out the great value of Nature and the Humanity.